It's Time To Stand Strong

It’s time to stand strong and see the true face of the VCP's brutal authority. 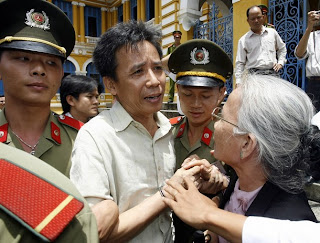 With over half century having passed since the Vietnam Communist Party (VCP) forcefully imposed its communist regime onto our country, Viet Nam has become a poor and underdeveloped nation. Under the VCP's regime, the Vietnamese people have endured more poverty, suffering and insecurity than ever before.

Without the promise of democracy and freedom anywhere on the horizon, Viet Nam is left wholly underdeveloped and at risk of social destruction. The absolute rule exercised by the VCP's ruling party is the sole cause of this downward spiral.

The saying that "power tends to corrupt, and absolute power corrupts absolutely," holds all too true under the VCP's regime.

Fraud, corruption and conversion of public assets for personal gain by the VCP have denied Viet Nam of its legacy. With every day that passes, Government officials find ways to enlarge their own coffers at the expense of the common family. Hundreds of VCP members have directly participated in crimes such as corruption, influence peddling, bribery, and theft not to mention more heinous crimes like rape, violence and murder… As a consequence, Vietnamese society has sadly become even more deteriorated with each passing year.

Where the vast majority of the Vietnamese people work hard every day at poverty level wages in order to survive, an elite minority class of red capitalist, who enjoy privileges granted to them by their governmental connections, live an extravagant and bourgeois lifestyle. The sign of any third world country is the great disparity between the rich and the poor without a defined middle class. Viet Nam is a classic example of this. Social classifications are inverted. The gap between rich and poor is escalating, and the inequity between each class leaves the Vietnam weaker as a whole. 95% of the Vietnam's population, which comprises of laborers, farmers, intellectuals, small-business men, youths, students lead an existence that is at or below the poverty level. They are forced to find other means in order to merely subsist. Some must go overseas to work as laborers, while others have to marry foreigners. This is such contrast to VCP members who are getting richer and richer off the backs of the common man.

Many former communist countries such as Soviet Union, Poland, Hungary, Yugoslavia and Romania have realized the futility of communism. Unfortunately for our nation, the leadership of Vietnam Communist Party still holds fast to its unrealistic doctrines as a way to mask their true dictatorial nature.

Using its suppressive governmental apparatus to completely take control of power, combined with its obscurant policy as well as instilling fear in its citizens, the VCP has a death-grip on Viet Nam. While the world trend is moving toward Freedom, Democracy, and Independence, the VCP Government is an archaic monolith that refuses to recognize its out-dated existence. It does not care about the future of its country and its own people.

In order to protect this single-party dictatorship, the VCP has implemented and fostered many illegitimate diplomatic and economic relationships. It has signed numerous treaties relating to territorial and oceanic boundaries that although beneficial to VCP members and their financial interests have proved disadvantageous for Viet Nam by losing lands left by our forefathers. If threatened by foreign enemy, the VCP will be unable to defend our country's sovereignty.

By fiercely applying obscurantism, preventing freedom of speech and publication, and having absolute control of the mass media for over the past half century, the VCP has forced the nation into ignorance, isolation and underdevelopment in spite of the advanced development of economics and sciences occurring worldwide. Viet Nam today is far behind its neighboring Asian countries, such as South Korean, Taiwan, Malaysia, Philippines, Thailand and Indonesia in the numerous areas, including public education, science and economy.

Totalitarian dictatorship is nothing more than another face of slavery that, if not stopped, will destroy the Vietnamese people for generations to come. Now is the time for us draw a line and make our stand. The destiny of our country and our people cannot be left in the hands of the VCP. It’s time to stand strong and see the true face of the VCP's brutal authority.

By any and all means, and at any price, we must be determined to fight for our nation in order to give it back to the common family. For the future of our country and our people, let us extend our helping hands; let us be part of the People’s Democratic Party and fight for the objectives stated in the PDP Proclamation. This Proclamation, which was declared on 6/15/2005, includes the following 9 plans of action:

1. Use all means, public or underground, to mobilize our compatriots to get involved in the struggle for Freedom, Democracy, Justice and Prosperity, in the spirit of Nonviolence.

2. Struggle for the immediate release of all political prisoners.

4. Struggle to defend the independence of the fatherland, to preserve the territorial integrity of the country.

5. Struggle to demand improvement and security in social life, especially for the underprivileged classes.

6. Struggle for the right of every citizen to participate in political life in an official manner and without discrimination.

7. Depend on the force of the people and international support, in order to organize free elections to choose fair representation. Organize a referendum so that the people can express their views in the choice of political system.

8. Struggle for equality of each citizen, without any consideration of origin, breed, class or opinion, according to the Universal Declaration of Human Rights of the Citizen.

9. Struggle for a change of Constitution and Laws to represent the real wishes of the people to bring Vietnam towards a State of democracy and justice.

“A lone tree is not thicker than a bush,
Three unified trees can make a forest.”

Let pray our forefathers helping us to strengthen our beliefs for overcoming differences and difficulties.
Let us stand firmly to crush the rock underneath.
Let hope for Vietnam to soon achieve Freedom, Democracy, Equality and Prosperity.