A court in the northern port city of Haiphong sent six more pro-democracy activists to prison for periods ranging from two to six years only days after two other men were given three years each.

The majority were found guilty under the country's catch-all Article 88 of the criminal code of spreading propaganda against the Socialist Republic of Vietnam. Some of the accused were believed to be members of the free-speech Web-savvy group Bloc 8406 formed three years ago.
The charges stem from an August 2008 incident in which all six of the activists hung banners from overpass bridges along busy roads in Haiphong and neighboring areas. Wording on the banners criticized the lack of multiparty democracy.

But the banners also slammed the Communist Party for "losing" some of the internationally disputed Spratly Islands to China and other nations. About 45 of the more than 600 tiny Spratly reef islands in the South China Sea are currently occupied by small numbers of military forces from the People's Republic of China, Taiwan, Malaysia, the Philippines and Vietnam.

None of the accused confessed to the charges against them, media reports said. Those sentenced on Friday include writer Nguyen Xuan Nghia, 60. As the group's leader, he received the longest jail sentence, six years.

All five of the accused got three years on probation after their sentences are finished.
Electrician Nguyen Kim Nhan, 60, received two years in jail and two years probation.

"The individuals have committed no crimes and were only exercising their rights to freedom of expression by peaceful means," the foreign-based Peoples' Democratic Party said in a written statement published by many Web sites including the Viet Catholic News.

"The Vietnam Communist Party has ignored these basic human rights, continued to crack down and used harsh sentences to silence pro-democracy activists. The People's Democratic Party strongly condemns the trials and sentencing. We call upon our members and the Vietnamese people at home and abroad to continue fighting for human rights, freedom and democracy for Vietnam."

The statement was written by party spokesperson Nam Tran, 50, whose real name is Cong Thanh Do, an engineer living in San Jose, Calif. In 2006 he and he wife were arrested while on a family visit to Phan Thiet in southern Vietnam. They were released after only a few hours. His family said at the time that he was accused of conspiring to set up a terrorist attack on the U.S. Consulate in Ho Chi Minh City, according to a report on the Web site of Reporters Sans
Frontiers. He was probably detained for what he posted on the Web, noted RSF.

The sentences were "predetermined," according to the California-based Vietnam Reform Party, also called Viet Tan. The activists, along with cyber-activist Pham Thanh Nghien, arrested in September 2008 but who has yet to be formally charged, are all innocent, Viet Tan said on its Web site.

"The kangaroo trials this week have demonstrated to the Vietnamese people and the international community that contrary to its denials, the Hanoi regime does hold political prisoners."

In a connected incident, according to Viet Tan, writer Tran Khai Thanh Thuy and her husband, Do Ba Tan, were beaten in their Hanoi homes and taken away by undercover police. The incident happened after the couple had visited with groups protesting outside the courthouse of the trials. They were beaten with bricks and threatened with AIDS-infected needles, the Viet Tan Web site reported.

The current round of sentencing began last week when three people, including high school physics teacher Vu Hung, 43, and a poet, Tran Duc Thach, both received jail terms of up to three years. Vu Hung's brief comment at his trial was that he simply wanted his voice to be heard.
© 2009 United Press International, Inc. All Rights Reserved.

November, 5, 2009 - Vu Hung, a teacher and pro-democracy activist has been on hunger strike since October 7, 2009 after Hanoi authorities sentenced Hung to three years’s imprisonment and three year of “house arrest”. His life is in danger due to serious illness and month-long hunger strike.

On Wednesday November 4, 2009, his wife Mrs. Ly Thi Tuyet Mai came to visit him at New Hoa Lo prison in Hanoi, she was told Vu Hung was no longer available to see her. But reliable sources told her, due to his health has deteriorated rapidly, fearing Vu Hung’s life is in danger, the prison guards have rushed him to the hospital. 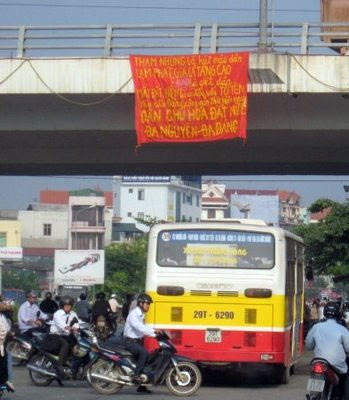 Banner calls for democracy, multi-party and anti-corruption in Ha Noi
To protest the unfair and unjust verdict, Vu Hung staged hunger strike since then. Currently, Vu Hung is probably taken to a Ministry of Public Security’s Hospital 198 in Hanoi for urgent treatment after he has totally collapsed due to hunger strike almost 30 days in New Hoa Lo prison.

Vu Hung also protests Vietnam jail’s conditions where the government has used prison system to terrorize and dehumanize the pro-democracy activists. In New Hoa Lo prison and all of other Vietnam prison camps, many hardcore criminals are being jailed together with the political prisoners in small and dirty cell. In very common case, prison guards use criminal prisoners to beat and intimidate political prisoners. No TV, printed materials, books or magazines allow to watch and read except the mouth-piece of the Communist Party “Nhan Dan” newspaper.

Recently, on October, 7 2009, around 40 political and religious prisoners in Z30A Prison Camp in Xuan Loc district, Dong Nai province had staged a hunger strike to protest the ruthless and inhuman conditions of Vietnam’s jail. They demand to have rights to read newspapers and watch news other than routine official voice newspaper of the Communist Party. They also want to have a library and allow times for political and religious prisoners to read news. Due to this daring protest, many political prisoners as Dr. Le Nguyen Sang, lawyer Tran Quoc Hien, lawyer Nguyen Bac Truyen, Mr. Truong Quoc Huy and religious prisoners as Mr. Quynh Anh, Mr. Tran Huu Canh all were locked into solitary confinement and denied visit times from their relatives.
The People’s Democratic Party calls on the Hanoi authorities to release teacher Vu Hung immediately for urgent medical treatment, to respect human rights, to end “torture”, cruel and inhuman prison’s policy in ill-treatment and punishment of the political and religious prisoners. (1)
Tran, Nam
Spokesperson of the People’s Democratic Party

(1) Convention against Torture and Other Cruel, Inhuman or Degrading Treatment or Punishment (United Nations High Commissioners for Human Rights)
Article 1
1. For the purposes of this Convention, the term "torture" means any act by which severe pain or suffering, whether physical or mental, is intentionally inflicted on a person for such purposes as obtaining from him or a third person information or a confession, punishing him for an act he or a third person has committed or is suspected of having committed, or intimidating or coercing him or a third person, or for any reason based on discrimination of any kind, when such pain or suffering is inflicted by or at the instigation of or with the consent or acquiescence of a public official or other person acting in an official capacity. It does not include pain or suffering arising only from, inherent in or incidental to lawful sanctions.
-------------------